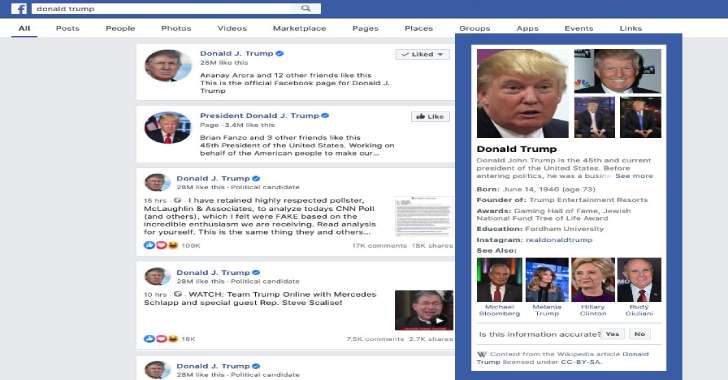 Facebook has started to include boxes of information on Wikipedia in its search results. Looking up famous celebrities, movies , television shows and more shows the information box on Wikipedia along with their Facebook page and other info.
The new update has also been confirmed by Facebook. The name of this feature will be “pilot software” available for desktop , mobile web and IOS, i.e. this feature will not be included in the android app.
The function works with the regular Facebook search bar, which is available at the top of the screen. For example, if you’re searching in the search bar for Narendra Modi, Facebook will show a small knowledge box (or panel) on the right side with information gathered from Wikipedia-similar to Google’s Knowledge Panel on the right side of the search page.
The box also contains links to the Facebook and Instagram page of the topic (in this case Narendra Modi), along with the links “also see.” Given that Facebook is still testing this functionality, we will see more information being added to the knowledge panel, such as related books, official websites and so on, until it is updated.
Users can try it out by searching for a public figure, movie, place on Facebook. If the feature works then the information box for Wikipedia will appear on the right side. The knowledge box on Wikipedia also displays personal information such as the date and place of birth for the person.
Also Read
Why Google Removed “Remove China Apps” From Play Store?
Dropbox Quietly Launches An Invite-Only Password Manager App For Android And iOS
Why TikTok’s Ratings Moved Up to 4.4 Stars on Google Play?