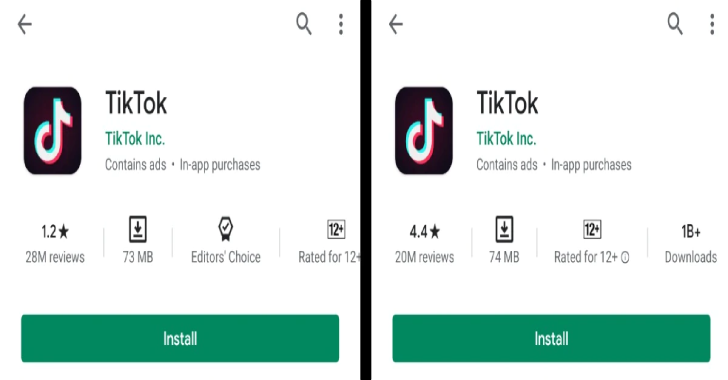 Google Play ‘s user ratings of TikTok have gone up to 4.4 stars from 1.2 stars that appeared last week.
Over the past few weeks, TikTok has earned a lot of hate from people that culminated in its rating going all the way down to 1.2 stars on the Google Play Store.
This has happened for several reasons including the fiasco of YouTube vs. TikTok, the spread of coronavirus from China and more.
In addition , the users began supporting homegrown apps in order to support India and not help the Chinese platform grow further. In just a few weeks after its launch, TikTok alternative Mitron app saw more than 5 million downloads on Google Play Store.
The biggest chunk of negative comments came in after a dispute surrounding a video posted by the famous TikToker Faizal Siddiqui came up with the short-video app. Shortly after, Twitter was bashed with hashtags like # IndiansAgainstTikTok.
Currently , Google has deleted millions of one-star ratings in order to get TikTok back up due to its comment posting rules that explicitly require the company to delete negative feedback and ratings that account for a mass attack.
Without specifying the TikTok case, a spokesman for Google said the company is taking corrective measures to delete unacceptable ratings and comments as soon as it considers episodes of spam violence.

“Play Store ratings empower users to provide useful comments on their apps and articles experience for the benefit of others to make informed decisions,” the spokesman said in a statement.

Like the update on Google Play, TikTok ‘s ratings for its iOS version on the Apple App Store over the last seven days show no significant difference. Last week the app had an average 3.5 star rating which fell to 3.4 star.
It also appears that Apple hasn’t removed any ratings because they’ve risen from more than 11 lakh to 12 lakh in the last one week. It seems that iPhone users generally weren’t part of TikTok’s rule breaking.
Also Read
Popular AnTuTu Benchmark Removed From Play Store By Google
Google Play Store Bans Chinese App Developer with 600 Million Downloads
Facebook Reportedly Pulling off This VPN app from Google Play Store