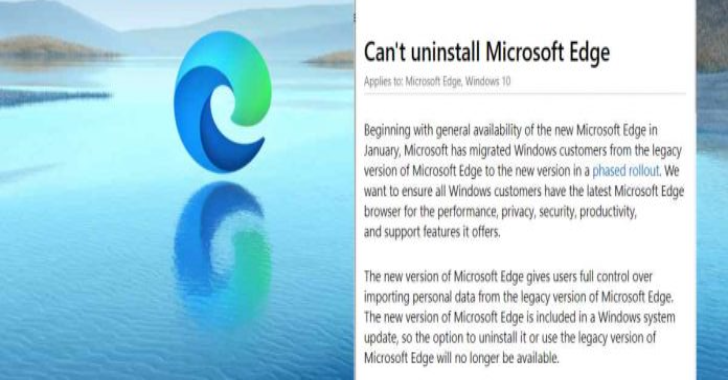 In June this year, Microsoft rolled out its Chromium-based Edge browser via Windows 10 May 2020 update to all users running version 1803 and above.
For those who have tried to remove their device’s updated Chromium-based Edge browser found they couldn’t. Apparently, once they migrate to the new version, Windows 10 users will not find the option to uninstall the new Microsoft Edge installed via Windows System Update. Neither can they return to the browser ‘s old, HTML version.
But it also points to the fact that Microsoft Edge’s latest edition allows users complete control over importing their personal data from the previous edition of Edge. Begin new Edge > Settings > Profiles > Import browser data to use this feature, and select “Microsoft Edge Legacy”
According to the report, Google Chrome rocks a global market share of 71.11 percent at the end of July, whereas Microsoft Edge now holds 8.09 percent of the browser ecosystem worldwide. Mozilla’s 7.36 per cent share of Firefox clocks in.
Pushing Edge on all Windows 10 PCs will have an effect on those numbers, and in the coming months Edge will see a spike in use figures as more Windows 10 users know a new web browser is on their PC.
Also Read
Google Meet Now Allows You to Cast Your Meetings Using Chromecast
Microsoft Launches Surface Duo ‘Communication Device’ 2020
Samsung Lays Out Its Vision For 6G : 2030